The Dome of Saint Gaudenzio was built on the homonymous Basilica, between 1577 and 1690 and placed on the city’s highest spot. During the second half of the 1700’s architect Benedetto Alﬁ eri (uncle of the poet Vittorio Alﬁeri) designed the bell tower, which dominated the view of the chief city until the construction of the Dome of Saint Gaudenzio.The population of Novara wished to improve their Basilica with the construction of a dome, but this operation proved to be quite costly for the Fabbrica Lapidea, the institution that was founded in 1552 and that to this days oversees the works carried out inside the basilica. Thanks to a public subscription, as well as through the “imposta del sesino” (a special tax on meat), just like Charles Felix Savoy had determined, in 1840 the Fabbrica was able to cover the costs for the conclusion of the basilica. Alessandro Antonelli was put in charge of building the dome and re-fashioning the façade, which was never fully com-pleted. The only element that was put into place is the massive walnut door with decorations. The construction works lasted for over forty years, and the original idea of Antonelli underwent several changes and adjustments. The ﬁ rst project dates back to 1841 and works began only three years later. Of this project only the arches where realized. An interruption came with the First Italian War of Independence (1848-1849) so the architect had time to improve his project, and when the works resumed in 1855 he presented a new project that included an extra crown of pilasters that would grant even more visibility to the monument. The top of the dome was built between 1876 and 1878. In may 1878 a statue depicting the Savior, realized by Pietro Zucchi, was placed on top of the 121meter structure. Today the original one is kept inside the basilica, while the one that crowns the dome is a ﬁ berglass copy. 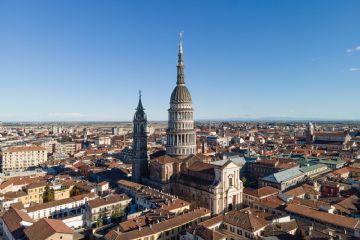 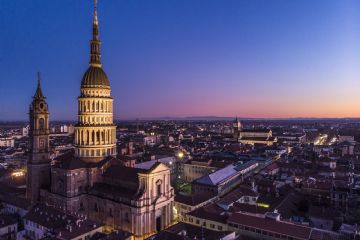 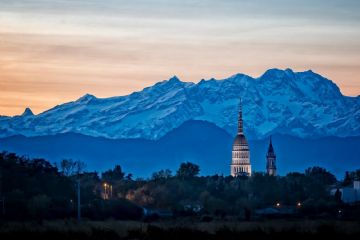